So I wrote another book: 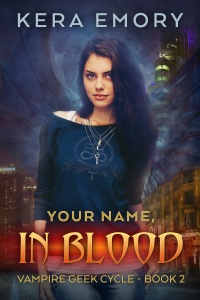 And yes, that’s my idea of marketing.

I had this idea for a while that I would make ‘soundtrack’ posts, because music is such a huge driver of my writing. But there’s no time to write blog posts when you’re wrestling with crippling self-doubt, AKA ‘being a writer’.

Still, I’m shuffling Spotify playlists around today as I prepare to move on to some new projects, and I found some stuff I wrote for one of the songs on my Your Name, In Blood playlist. Here it is:

If you don’t know who Bob Mould is … well, Google it. Or just know he’s a musical genius who pre-dated grunge.

I’ve been listening to The Slim for over twenty years. I first heard it on the ‘Alternative’ channel on some cable music service we were paying for at the time. (My youth was a bit weird; due to the severe nerditry of myself and the people I hung around with, we didn’t have cable TV, but we had eight phone lines (for modems, of course) and this weird cable-based radio that Comcast was selling a la carte.) I heard this song, and I went out and bought the CD immediately.

This song has never stopped affecting me, never gotten ‘played out’. And to me, it’s always been about betrayal, plain and simple. (Textually, it’s about something else entirely, but songs often tell me a different story than the artist intended.) Either way,  it’s stunningly visceral. (And if you ever track down a live version of it, you’ll know that visceral is an understatement.)

It’s grungy, but not just for the sake of being grungy; it’s for the sake of emotional brutality. If you really listen to it, let yourself get sucked into the lyrics and the vocal performance and the drums … you’ll feel like someone beat the shit out of you afterwards. I think a lot of songs want you to feel that way; for me, very few of them succeed the way this one does.

And the steady, relentless drums are part of why this is a John song. All of his songs have a well-defined drum track, of course. But this is the song that comes at the end of John’s story … when he figures out the truth.